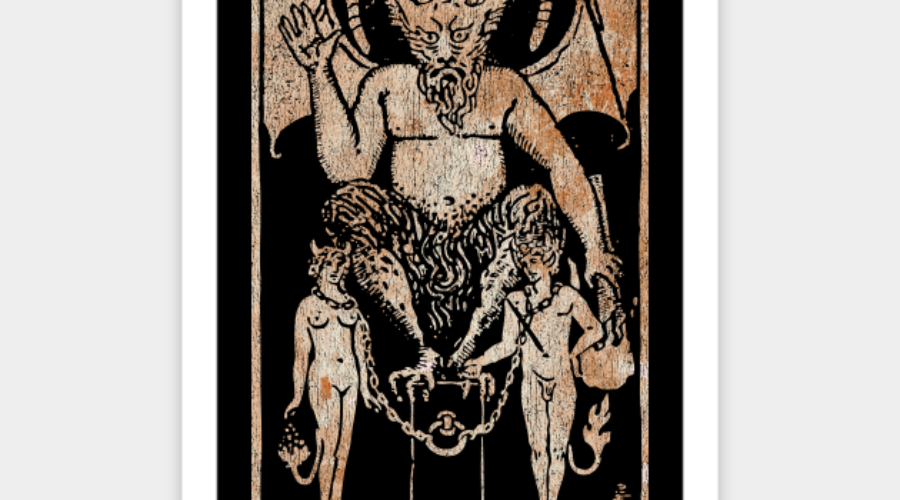 Interpretation Of The Devil Card in Tarot

On every soul’s journey through the human sphere, as he or she wants to grow and change, temptation emerges. This is represented by the main arcana card The Devil in tarot decks based on the Latin Tarot (Tarot de Marseilles), such as the Rider-Waite-Smith-Tarot.

When the Devil appears in a tarot spread, you may be sure that temptation is on the horizon and that the soul on its journey has arrived at a crucial fork in the road.

The symbolism of the Devil
The imagery on the Devil card is ominous. The card has a black backdrop with a horned demon with dragon wings perched above a door. An inverted pentagram is visible above his head. He holds a fiery scepter aimed at the earth in one hand and a raised hand in the other. Adam and Eve are imprisoned to the door at his feet. They have tails and horns to indicate that they have succumbed to the Devil’s enticement, yet the shackles around their necks are slack as if they might easily slip away if they tried.

Mythology of Temptation
Throughout human history, temptation mythology abounds, and The Devil is the embodiment of this temptation.

During his 40 days in the desert, Jesus was tempted by the Devil, according to Matthew 4: 1-11 in the Bible.
Horus, the Egyptian god, was likewise seduced by his uncle Seth in the desert of Amenta.
Mara tempted the Buddha before he attained enlightenment.
Similar temptation mythology can be found in many hero’s travels, such as Odysseus’s tempting by the Sirens in The Odyssey. Temptation is a crucial experience on the way to enlightenment, and succumbing to, overcoming, and/or rejecting it is all part of the hero’s journey. This crucial stage of the journey is represented by the Devil card in the tarot.

Place in the Major Arcana

The Devil is one of a group of key arcana cards, along with Death and the Tower, that depict chaotic change and possible tragedy. The major arcana cards represent a soul’s journey from innocence to enlightenment, and this gloomy set of cards reveals that along the way, a soul must encounter and overcome negative influences to evolve into the light. As a result, the Devil represents the trials that the soul must face to choose to emerge from the darkness and return to the light.

Numerology
Although the Devil is the sixteenth card in the major arcana, it is numbered 15 (XV) because the Latin tarot’s major arcana cards begin with zero (0 – The Fool). 15 signifies personal responsibility because it lowers to 6 (1+5=6) in numerology. 666 is seen as the Mark of the Beast or a symbol of the Devil in the Bible.

Eve in Chains and Adam
The Devil isn’t the first time Adam and Eve figure in the major arcana. They first appear on the card The Lovers, which discusses the importance of making decisions. On the Devil’s side, they’ve given in to temptation and made a decision that has enslaved them to darkness, yet it’s worth noting how slack their chains are. While they may feel trapped by their decisions, the looseness of the shackles suggests that escaping the repercussions of succumbing to temptation by making a different decision is a simple alternative.

In a Tarot Spread, the Devil
When the Devil shows up in a tarot spread, it means that someone or something is succumbing to temptations that are not in their best interests. The following are some more possible interpretations:

It could imply that someone has entered the querent’s life and is about to take them down a path of darkness.
It could be a sign of a temptation that could lead to a gloomy moment for the querent.
In a love reading, for example, it could indicate that the querent has given in to darker urges like lust rather than true love, or in a financial reading, it could indicate that the querent is choosing the easy way out, which could lead to short-term gain but long-term tragedy. When the Devil appears, it advises you to examine your reasons and determine if they are correct.

The Devil Turned Around
When the Devil is inverted, it has a typically good connotation. It could signify that barriers will be easier to conquer than you think, or that what appears to be challenging situations will be quickly surmounted.

Temptation is an inevitable part of the journey.

Everyone experiences temptation at some point in their lives, but how they deal with it and overcome it is a matter of personal decision and conduct. Faced with temptation, you have the opportunity to define who you are, and dealing with it well is part of the journey from innocence to enlightenment.

Talk To A Tarot Card Expert to know more about the significance of the devil card reading.